A Complete History of US Dollar Devaluation Since 1913 EDITOR'S NOTE: When critics of the Federal Reserve say that the dollar is virtually worthless, what does that mean exactly? Does it refer to the simple and well-known argument that there’s nothing of real intrinsic value supporting it? Again, that’s old news. Does it mean that the dollar has lost virtually all of its value since the inception of the Fed? Quite possibly, but we still have enough to live regular lives and support ourselves financially, don’t we? Or perhaps we’ve normalized an economic reality that is far more denatured, and to which we’ve lost our basic sense of economic normalcy. It’s an economic cliff that we’ve grown accustomed to; a risk of falling that somehow we’ve accepted. The aim of the article you’re about to read is to wake you up with a sobering splash of cold water. The devaluation of the dollar is a very serious matter. And if you can read the article and stare at the chart illustrating the dollar’s slow disintegration without feeling that you’ve been duped, then it’s time to capitulate and confess that the central bank’s economic gaslighting efforts truly paid off in spades, just not for you or any American excluded from the financial elite.

To devalue a currency, like the dollar, means that the value of the currency decreases. In the case of the dollar, we call this dollar devaluation.

The value of a currency is also referred to as purchasing power.

The more a currency is devalued, the less you can buy with it because the purchasing power decreases.

Let's dive into the stats.

How Much has the Dollar Devalued Since 1913?

The graph below shows the purchasing power of the US dollar since 1913. 1913 is when the Federal Reserve, which is actually a privately-owned central bank, took over the US banking system.

As you can see, it’s been pretty much downhill since the Fed took over. In fact, the dollar has lost over 96% of its value.

That means today’s dollar would be worth less than 4 cents back in 1913. How much longer will the dollar maintain its reserve-currency status at this rate? 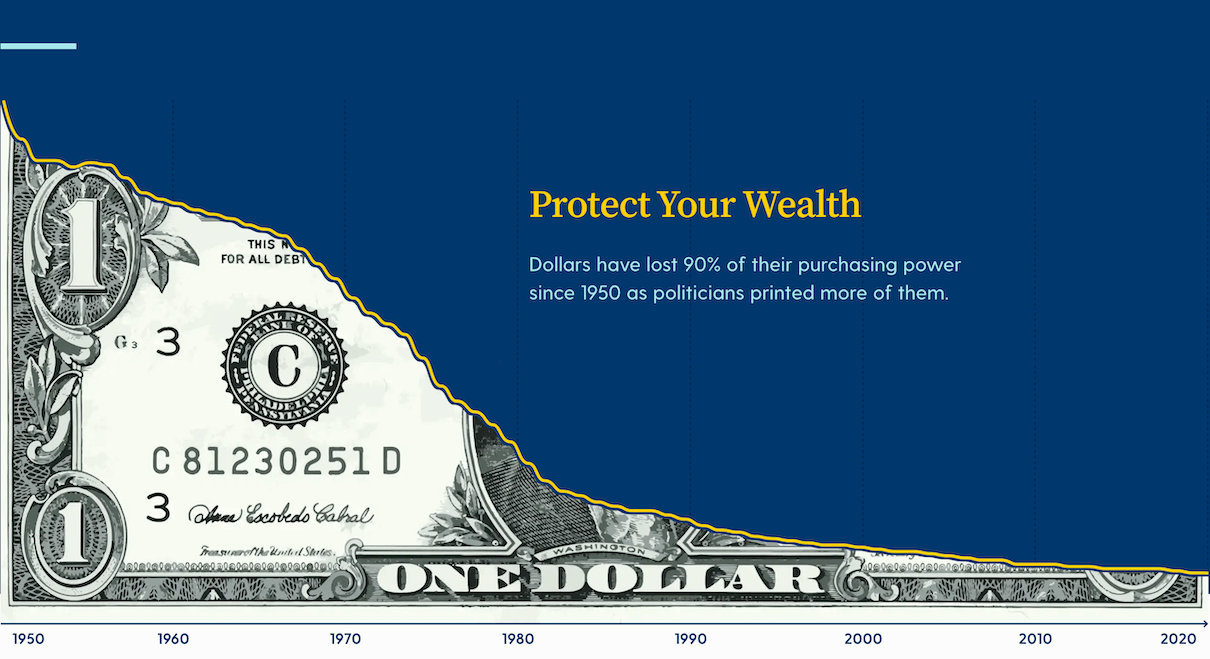 How does the Federal Reserve devalue the dollar?

Printing more money causes monetary inflation. That means there are more dollars in circulation, but just because there is more paper money floating around, that doesn’t mean value has been created.

The chart below shows the history of the dollar inflation.

All you really get is price inflation. Here’s an extreme example: Let’s say the Federal Reserve just gave everyone in America $1 million.

Wouldn’t that be great if everyone in America became a millionaire overnight? Unfortunately, nothing would change, except prices would increase.

Think about it. How much would you have to pay the plumber to come to your house, if he’s already a millionaire?

On August 15, 1971, President Richard Nixon "temporarily" suspended the Gold standard - the rule that $35 could be redeemed for an ounce of Gold.

Thus every dollar printed by the US government would need to be backed by real gold held in the custody of the government.

This prevented the government from printing as many dollars as they wanted, and thereby decrease the purchasing power of the dollar.

Once the Gold standard was severed, inflation skyrocketed, as seen in the chart below.

The chart below shows the history of the dollar devaluation. 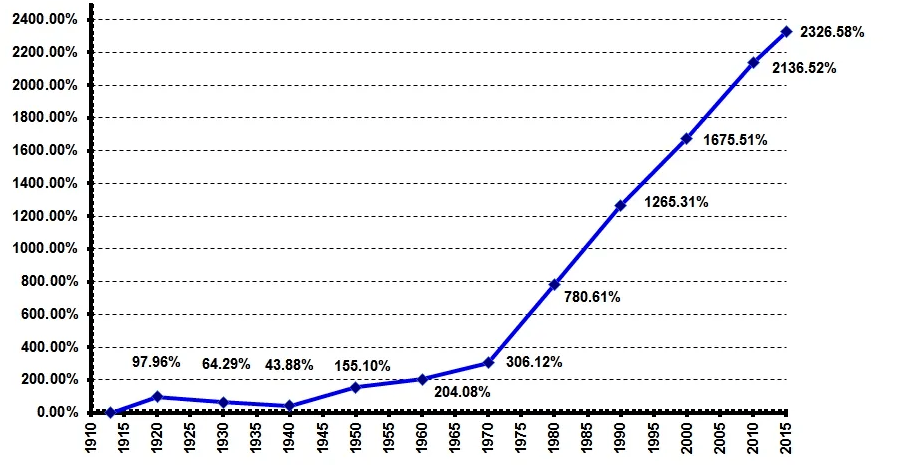 Unlike paper money dollars, which can be printed out of thin air, gold does not lose value.

In fact, gold doesn’t really go up or down. When gold goes up, it really means the dollar is going down and when gold goes down, it’s actually the dollar getting stronger (increasing its purchasing power).

So by keeping a portion of your savings in gold, you offset the losses of your dollar being devalued.

When you buy gold, silver or other commodities that resist inflation, it’s called a hedge against inflation.