At least 22 MILLION Americans are now out of work due to COVID-19 as another 5.2m claim unemployment - wipes out 13.5% of US workforce and 10 years of job growth

There were 5.2 million new claims for unemployment benefits filed last week, according to the latest Labor Department figures released on Thursday.

The staggering number of first-time claims was on top of the 16.8 million applications filed since the virus took hold in mid-March.

It is the worst stretch of US job losses on record.

All businesses deemed nonessential have been closed in 48 states as the economy has essentially shut down. 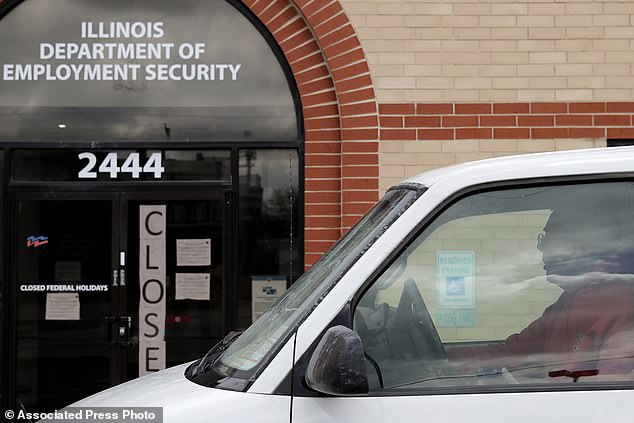 There were 5.2 million new claims for unemployment benefits filed last week, according to the latest Labor Department figures released on Thursday. Pictured is the closed Illinois Department of Employment Security building in Chicago on Wednesday

Some economists say the unemployment rate could reach as high as 20 percent in April, which would be the highest rate since the Great Depression.

Layoffs have spread beyond services industries such as restaurants and hotels into blue-collar and professional occupations, including software programmers, construction workers and sales jobs.

Up to 50 million jobs are vulnerable to coronavirus-related layoffs, economists say - about one-third of all positions in the United States.

A quarter of of Michigan's workers are now jobless with more than one million residents applying for unemployment benefits amid the pandemic.

Michigan's increase in claims for unemployment benefits makes it the third highest state in the country behind California and Pennsylvania.

How Will The U.S. Fed Reserve Turn Japanese

Source Says JP Morgan Will Be Moving $230 Billion To Germany

Fractional-Reserve Banking Is Important, And Dangerous

Digital Money Coming Soon To America And The World

China Has A Plan For World Domination By Digital Currency

Does Dirty Money Flow To The World’s Most Powerful Banks?