EDITOR NOTE: The author below is right about silver volatility...well, somewhat. Being a silver investor over the “last few weeks” might have been quite challenging. But that’s only if you’re myopic, investing for the wrong reasons, or unable to understand the price action landscape which, by the way, hasn’t been going on for just “a few weeks” but since last August of 2020. We’re talking about a “trading range”--a large range of consolidation, of mainstream indecision, and smart money accumulation. The author below lays out quite an array of technical and fundamental angles to consider. His forecast: silver can reach $100 an ounce. We can simplify this for you a bit. A key technical level is the price of $22 an ounce. Critical support is to be found at that range. Despite this technical level, however, you have the economic factors--monetary and industrial--that will serve as silver’s tailwinds. In other words, the current sideways market--an accumulation that deceptively appears as if it has no real momentum--is a tremendous opportunity to buy the metal before its next leg up. Wait too long and you’ll see the fundamental “thesis” play out. Except you may not be in it.

Being a silver investor over the last few weeks has become more psychologically challenging.

That’s true even for us die-hard silver enthusiasts.

After all silver had a standout 2020, having gained about 47% in its best year since 2010. That easily outpaced gold’s own impressive 25% return.

But the reality is that so far in 2021, silver is down 9%. And meanwhile, nearly all the fundamental market drivers have remained intact. It seems the pressures on silver prices are likely from two angles. The first is after such an impressive 2020, it was due to correct. That’s what bull markets do.

The second pressure point is a rising US dollar index, likely thanks to rising long-term bond yields. However, it’s important to consider that this trend will also run its course and exhaust itself. That could happen naturally, or the Fed could intervene by imposing Yield Curve Control.

But higher yields are a sign of soaring inflation expectations and burgeoning economic activity. And a stronger US dollar, which favors imports over exports, is probably not a favored outcome for central planners.

So patience is the best approach at this point. In my view, the end of this silver correction is nigh.

In a recent report, Bank of America’s commodity analysts indicated they expect to see silver prices averaging $29.28 this year. That’s based on their expectation for a modest supply deficit of 281M ozs. They also point out, “While we expect a rebound in supply this year, output should remain below the peak levels seen a short while back, also because the project pipeline is relatively empty.”

The push for green energy combined with massive infrastructure spending, and stalwart investment demand, should keep a bid under the silver price and help it rise again this year.

Although silver is down 9% in 2021, and has retreated 19% since its August peak near $30, that’s certainly well within historical bull market corrections.

The point is silver corrections come with the territory. Investors need to embrace them, and use them to their advantage. 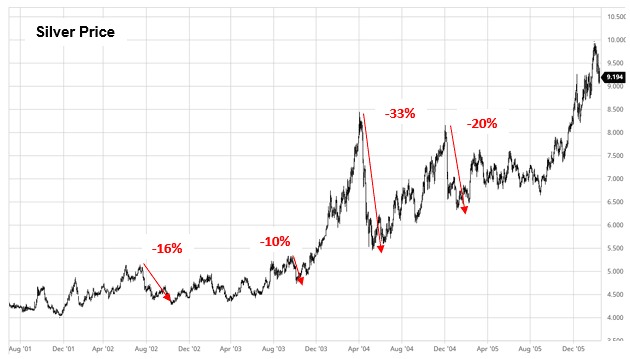 Then, between 2006 and 2011, more short but sometimes deep corrections came, with silver dropping 13% or more three separate times. 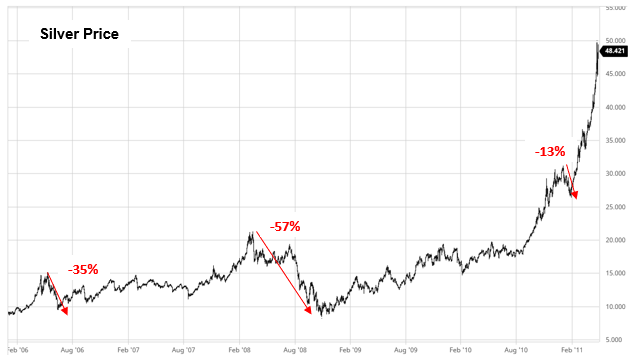 The point is to look at what silver did after those corrections. In nearly every case, it went on to establish new bull market highs.

Now let’s look at what silver has done in multiple currencies.

As you can see from the following chart, over the past 21 years silver has produced an average annual return between 8% (Swiss Franc) and 16.48% (Chinese Yuan). In USD, silver averaged 11.43% per year. 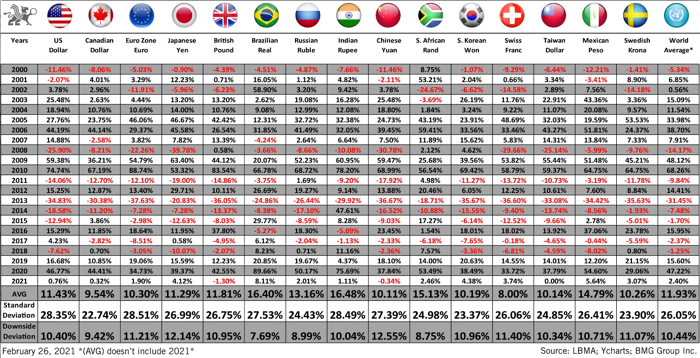 Of course, that came with considerable volatility as well as a number of down years. But the world average is 11.93% gains annually over the last two decades. So the overall trend is undeniably up: we’re in a silver bull market.

Now let’s zoom out for a longer-term perspective. 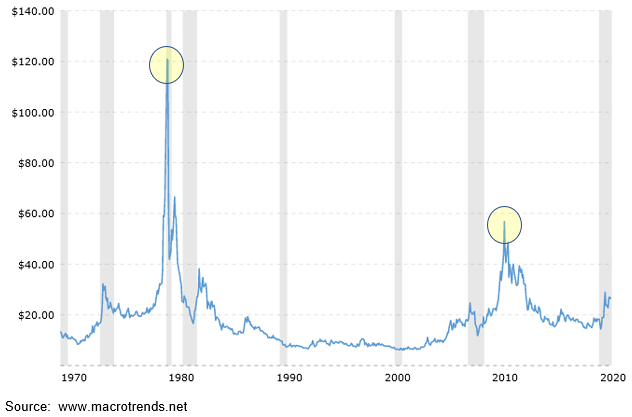 If we account for inflation, and that’s massively understated “official inflation”, then silver prices peaked at $120 in 1980 and around $57 in 2011. Today’s price near $24 is still well below those levels, suggesting a lot of upside remains ahead.

In fact at $24 today versus the inflation-adjusted $120 in 1980, silver is currently about 80% below that peak. And yet, current economic fundamentals like debt, deficits, spending, interest rates and supply/demand outlook are so much more bullish, that the 1980 $120 level is likely to be easily surpassed.

Looking at silver from a technical perspective, in my view we are either at or near a final bottom for this correction. 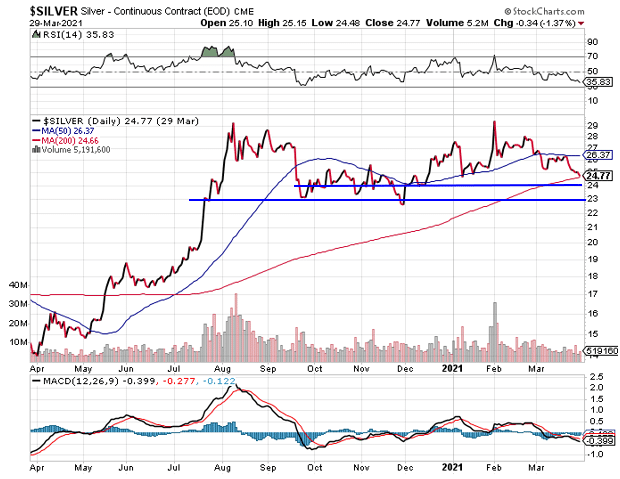 The $23 and $24 levels acted as support multiple times between late September and mid-December. I think any further weakness is likely to be limited near $23.

If you hold or you’ve been buying silver and/or silver stocks over the past several months, two approaches make the most sense to me right now. Either sit tight if you feel you have sufficient exposure to this sector, or gradually add to some of your positions if you feel they’ve simply gotten too cheap.

Investors should emphasize how to be properly positioned in this market, with balanced exposure to physical silver, silver producers and royalty/streamers, as well as silver developers and even high-octane junior silver explorers.

In the Silver Stock Investor newsletter, I provide my outlook on which silver stocks offer the best prospects as this bull market progresses. I recently added a junior explorer that’s up 40% in just eight weeks despite current weakness, with scores of others ripe for buying now.

It’s time to be a silver contrarian. History has rewarded us repeatedly.