Silver Price Forecast Star Of The Show In 2021

EDITOR NOTE: In a recent report by the London Bullions Market or LBMA, 38 analysts have raised their 2021 target prices across the board for all precious metals--gold, silver, platinum, and palladium. The specific price targets and rationale behind the forecast are included in the article below. What’s notable about this report is that silver is expected to outperform all precious metals this year, as consensus among analysts shows expectations for the white metal to exceed its safe haven peers. On the supply front, silver bullion coins are selling out fast as investor demand has seen a record-breaking increase, impressively across all forms of silver exposure--from physical silver to ETFs to mining stocks. Silver production has faced restrictions due to the Covid-19 pandemic. And despite the supplemental production efforts across various Minting institutions to satisfy investor demand, it doesn’t look like its impact on the current supply shortage will amount to any meaningful increase.

The bull run in precious metals is expected to continue through 2021 with double-digit gains across the board, according to analysts participating in the London Bull Market Association's (LBMA) annual price forecast report. 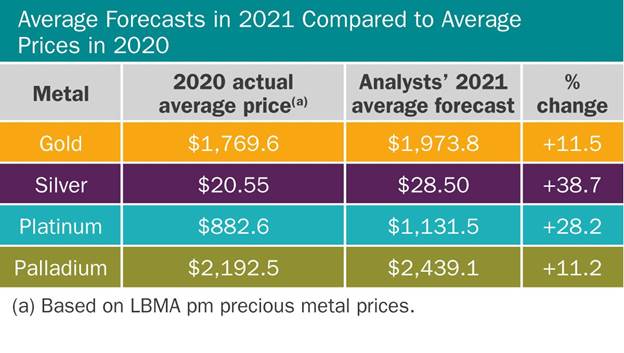 Thursday, in its annual report, the LMBA said that 38 market analysts participated in this year's forecast survey. Gold prices are expected to average $1,973.80 an ounce, up 11% from the 2020 average. However, the outlook is only a modest 4.5% increase compared to the average price seen in the first half of January.

With the gold market expected to be relatively tame through 2021, the LBMA said it expects all eyes to be on silver. Precious metals analysts expect silver prices to average $28.50 an ounce this year, an increase of 38% from the 2020 average price and up 8% from the average price since the first half of January.

The volatility seen in the silver market this past week could foreshadow the price action through the rest of the year.

"Silver is undoubtedly the star of the show," the LBMA said. "Silver is forecast to be the best-performing metal in 2021, but with a trading range of $38.5, nearly five times its range forecast last year, it looks as if it's in for a real rollercoaster ride in 2021."

Looking at the Platinum Group Metals (PGMs) market, analysts are expecting to see a reversal of fortunes between platinum and palladium. Analysts see platinum averaging 2021 around $1,131.50 an ounce, up 28.2% from the average price in 2020.

Meanwhile, analysts expect palladium prices to average this year around $2,439.10 an ounce, up more than 11% from the average price seen last year.

"The market was in love with palladium last year, and it proved the star performer, posting an impressive 52% increase in price in 2020. But analysts are predicting that it will be the worst-performing metal this year," the LMBA said.

As to the important factors driving precious metals prices in 2021, the report noted that 25% of analysts said that low to negative interest rates would be positive tailwinds for gold, silver, and PGMs.

At the same time, 21% of analysts said that a weaker U.S. dollar would support higher precious metals prices, and 16% are watching the Federal Reserve's extremely accommodative monetary policies.

"The gold bull market can be expected to continue not only in 2021 but well beyond. A great number of factors are at work for pushing the price of gold further up. To fend off the consequences of the politically dictated lockdown crisis, central banks around the world will keep interest rates artificially low and expand the money supply at unprecedented growth rates," he said to support his bullish outlook.

René Hochreiter, analyst at Noah Capital Markets/Sieberana Research, is the most bearish in the gold market as he expects improving economic conditions to weigh on the precious metal. He said that he saw gold prices falling to a low of $1,590 an ounce this year.

"After the fastest recovery in the history of the global equity markets, gold may see an equally sharp decline as risk and volatility fall," he said.

Polleit is also the most bullish analyst for silver prices. He said that he sees silver rising to $55 an ounce this year.

"In the last two years, the price of silver has benefitted as investors have increasingly built up their silver exposure via ETPs. This trend is most likely to continue – especially so as in the ultra-low interest rate environment, silver ETPs offer institutional investors return and diversification opportunities," he said.

Frank Schallenberger, analyst at LBBW, is the most bearish on silver. He sees prices falling to $16.51 an ounce this year. He noted that he doesn't expect investment demand to be as strong as it was in 2020.

"The reason for the good performance of silver in 2020 was the extreme buying of ETCs. This will not be repeated this year. And the fundamentals of silver don't look too good. Industrial demand as well as jewellery demand will take some time to come back," he said.

Looking at platinum, Glyn Stevens from MTSS UK is the most bullish on the industrial precious metal. He said that he sees prices pushing to $1,827 an ounce this year.

"2021 could well be the year for platinum to take centre-stage in the world of precious metals. Not only is demand set to outstrip supply, but the green hydrogen revolution is coming and platinum's role in this revolution is crucial," he said.

On the other side of the trade, Schallenberger is the biggest bear in the platinum market as he sees prices falling to $774 an ounce.

"Fundamentals still don't look too good for platinum! The supply surplus in the market is here to stay and the triumphant advance of electric vehicles will make platinum demand for catalysts even smaller," he said

Although palladium is expected to be the worst-performing asset in the precious metals space, there several bullish forecasts for this year. Six analysts see palladium prices pushing to $3,000 an ounce.

Zhexing Wang from the Bank of China, is the biggest palladium bear as he sees prices falling to $1,500 an ounce.

"Palladium is still facing great uncertainty in 2021. Palladium is more expensive than platinum, but it is likely to be replaced by platinum in industrial use, and the price difference between palladium and platinum may continue to narrow," he said.