Why You Should Be A Silver 'Hodler'

EDITOR NOTE: Silver is a misunderstood metal. Sometimes it’s a “rock star,” as the author correctly describes below in metaphor, but most of the time it appears like a one-hit-wonder, as investors often forget about it. Right now, it's a rock star, and it’s begun its first leg of a potentially multi-decade bull run. That’s because silver is both a monetary and industrial metal. The effect of monetary and stimulus efforts, namely inflation, will no doubt end up boosting silver prices to record highs. That’s just one part of the equation. The need for silver in the emerging sustainable energy trend will require silver at amounts beyond current production and supply. This, too, will run up silver prices, and remember, this trend is global in scale. Add to that silver’s affordable price relative to gold and you’ve got an investment that’s screaming BUY. Non-CUSIP silver is in high demand yet still available. It may not be available at current prices in the near future. In short, now’s the time to purchase physical silver and become a silver 'hodler' if you’re interested in hedging against inflation and generating demand-driven growth in your portfolio.

Silver is an odd metal.

The crowd loves to hate on it for decades. That's simply because they don't really understand it. But when sentiment flips, it becomes a rock star.

I think silver has entered its rock star period. And it's about to generate a string of hits. They won't be back to back, but they will be regular, with each subsequent one outdoing the previous.

That probably feels pretty far off right now. But it's likely to arrive sooner than most expect. When it happens, many will say it's unsustainable. They'll say silver will crash any day. And that's okay…for them.

Like Bitcoiners, those who really understand will become the new "silver hodlers," and they will profit the most. If the recent silver rout has you worried, then a little perspective should help put your mind at ease.

After all, silver's in a long-term bull market. And those never go straight up. The great thing is, this one is still very young.

Silver in the Rearview Mirror

Then the Covid-19 crisis hit, and silver crashed to $11.75 within a month. It was a temporary blip. The metal then zoomed to $30 in under five months. It's now been seven months since, and silver is currently around $26.

If silver was going to crash, it would have done so by now, and we'd be back near $18. Instead, the metal's been rangebound.

The way silver has been behaving is pretty much par for the course. Silver investors need to expect more of it, not less. When the gold to silver ratio peaked at an all-time record high near 125 last March, it appears to have marked a turning point.

What we see is silver corrected harder than gold in the initial selloff, but then rapidly caught a bid. In the last part of that July rally, silver powered ahead and detached from gold.

Since then silver has moved sideways in a wide range between about $23 and $28, while gold has been grinding slowly downwards.

We can clearly see this price action reflected in the gold-silver ratio, which had a waterfall drop from mid-July to early August, when both metals peaked. 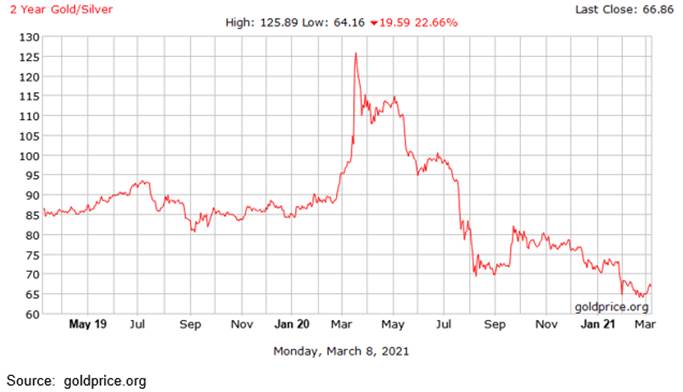 What happened? I think it was during this period when silver's dual roles as monetary and industrial metal asserted itself.

If you think about it, that was when the world's major governments and central banks went on a global, coordinated printing and spending spree. Within just the first two months, McKinsey & Co. says over $10 trillion in quantitative easing and stimulus had been announced. 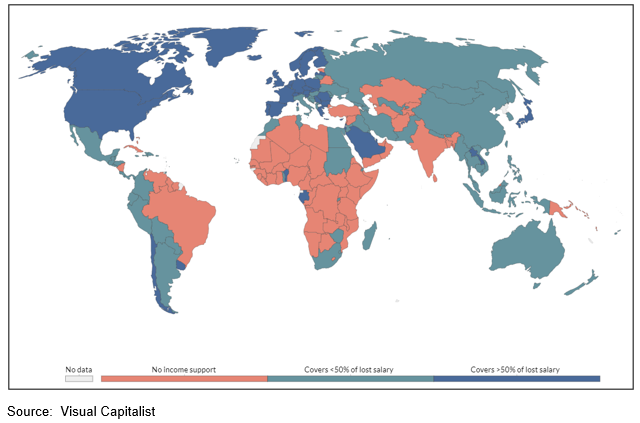 As this chart demonstrates, about 70% of the world's workers received some sort of income support. According to the International Monetary Fund (IMF), real global GDP shrank by some -3.5% in 2020.

Since then an endless stream of additional support and infrastructure programs have also been announced. The U.S. alone has just passed a $1.9 trillion Covid-19 relief bill. In addition, Biden is planning a $2 trillion plan to help rebuild and expand infrastructure, upgrade power and communication networks, and support and foster renewable energy and green transportation. Similar plans have been announced across numerous developing and developed nations alike.

Silver is sensing this paradigm shift. On one hand, it's reacting to the flood of fiat money that will be hitting our economies for the foreseeable future. It's why worldwide holdings in ETFs jumped by 331 million ounces last year to reach 1.04 billion ounces, which is more than an entire year's supply. The Silver Institute recently said it expects physical silver investment to reach a six-year high of 257 million ounces.

On the other hand, silver is reacting to the raw demand that's filling its pipeline. That's why we've seen the Silver Institute forecast global silver demand to rise by 11% in 2021 to reach an eight-year high. They see industrial demand reaching a four-year high of 510 million ounces, increasing by 9% over 2020, with electrical and electronics contributing the most gains. The accelerating rollout of 5G technology is expected to lead the push.

The PV sector mounted a healthy recovery in the latter part of 2020, and that should maintain a healthy pace this year and beyond. Although solar panel manufacturers are pushing to lower each panel's silver requirements, there are physical limits to this. Meanwhile, solar energy is catching on at an accelerating pace globally. And the Silver Institute sees the automotive market, with rapid EV adoption, growing by 50% from 60 million silver ounces to 90 million within just five years.

So you may be watching silver prices and wondering when silver will finally bottom and resume its uptrend. The truth is no one knows for sure; it may well have already happened.

Instead, investors should emphasize how to be properly positioned in this market, with balanced exposure to physical silver, silver producers and royalty/streamers, as well as silver developers and even high-octane junior silver explorers.

In the Silver Stock Investor newsletter, I provide my outlook on which silver stocks offer the best prospects as this bull market progresses. I recently added a primary silver producer to the portfolio which has gained nearly 10% in just six weeks, and a junior explorer that's already ahead 25%, despite recent weakness.

Those who have the benefit and conviction of understanding the silver market will reap the biggest rewards.

Don't let volatility shake you out. It's time to be a "silver hodler."

Debt Ceiling: Yellen Proposing to Suspend the Sale of Bonds