EDITOR NOTE: The US lost another 2.4 Million jobs last week, according to the most recent jobless claims report. Overall, we’ve lost all jobs created over the last decade. Our nine-week job loss total stands at an alarming 38.64 Million--the worst running period in more than five decades! Sure enough, the job losses we’re seeing now has already dwarfed the Great Recession. What’s next? The government’s CARE package will provide some relief to struggling Americans who are out of a job. But it may also come with a potentially devastating secondary effect: deepening the unemployment rate, bringing us closer to a second Great Depression, and further “socializing” our economic system.

The string of unprecedentedly huge spikes in jobless claims continues. In the last week 2.44 million Americans filed for unemployment benefits for the first time (slightly worse than the 2.40 million expected). 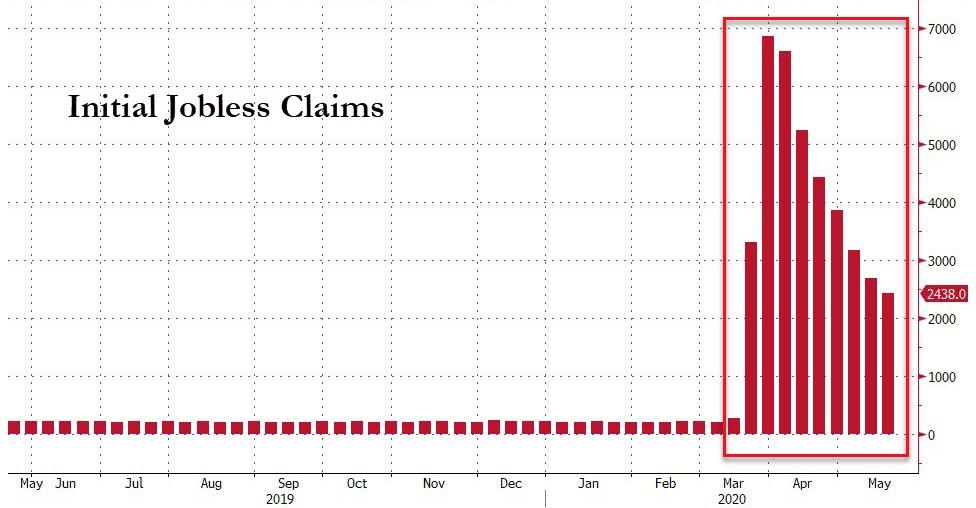 The small difference WoW suggests a second wave of unemployment is hitting...

That brings the nine-week total to 38.64 million, which is massively worse than the prior worst nine-week period in the last 50-plus years.

And of course, last week's "initial" claims and this week's "continuing" claims... the highest level of continuing claims ever 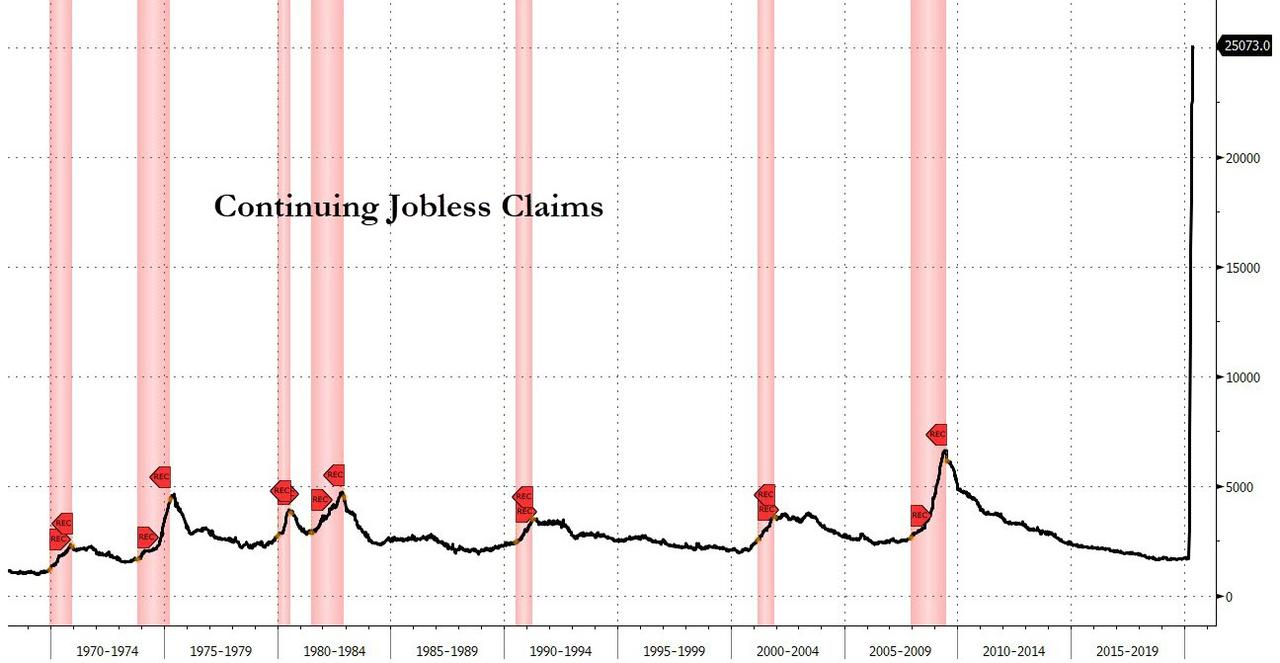 After last week's SNAFU with the Connecticut (overstating their jobless claims by 200k), this week saw Washington, California, and New York dominated the job losses...

And as we noted previously, what is most disturbing is that in the last nine weeks, far more Americans have filed for unemployment than jobs gained during the last decade since the end of the Great Recession... (22.13 million gained in a decade, 38.636 million lost in 9 weeks)

Worse still, the final numbers will likely be hurt even more due to the bailout itself: as a reminder, the Coronavirus Aid, Relief, and Economic Security (CARES) Act, passed on March 27, could contribute to new records being reached in coming weeks as it increases eligibility for jobless claims to self-employed and gig workers, extends the maximum number of weeks that one can receive benefits, and provides an additional $600 per week until July 31. A recent WSJ article noted that this has created incentives for some businesses to temporarily furlough their employees, knowing that they will be covered financially as the economy is shutdown. Meanwhile, those making below $50k will generally be made whole and possibly be better off on unemployment benefits.

As Mises' Robert Aro noted earlier in the week, the stimulus packages being handed out across this world provide us with an opportunity to document the anticapitalist process as it unfolds in real time, keeping in mind that when these inflation schemes fail, it will likely be blamed on capitalism.

The combination of increasing the money supply in order to pay people not to produce goods or services has consequences that not a lot of people are talking about.

It flies in the face of the free market and is as nonsensical as a negative interest rate. A loan that is forgivable is unconventional to say the least, because a loan is normally defined as an amount borrowed that is expected to be paid back with interest. When a loan is given on a first-come-first-served basis for the purpose of paying people not to work and is forgivable because it’s guaranteed by the United States government, we shouldn’t call it a loan.

It may be called socialism, maybe interventionism, and some may still prefer the term statism; but one thing is certain when it comes to the Paycheck Protection Program: it’s not capitalism!