An Interesting Story: Look At This Inflation-Adjusted Silver Chart

EDITOR NOTE: Sometimes chart patterns can project outcomes that fundamentals can’t. Right now, the silver’s fundamentals and the technicals are aligned. Silver has breached a critical level, one that historically has led the metal on to record levels. The “pitchfork” model shows you where prices might go. Overall, when fundamentals and technicals are aligned, your odds have increased. And in the case of silver, it’s a high-probability scenario that you’ll want to exploit while still early in the coming uptrend.

This inflation-adjusted silver chart (from macrotrends.net) tells an interesting story: 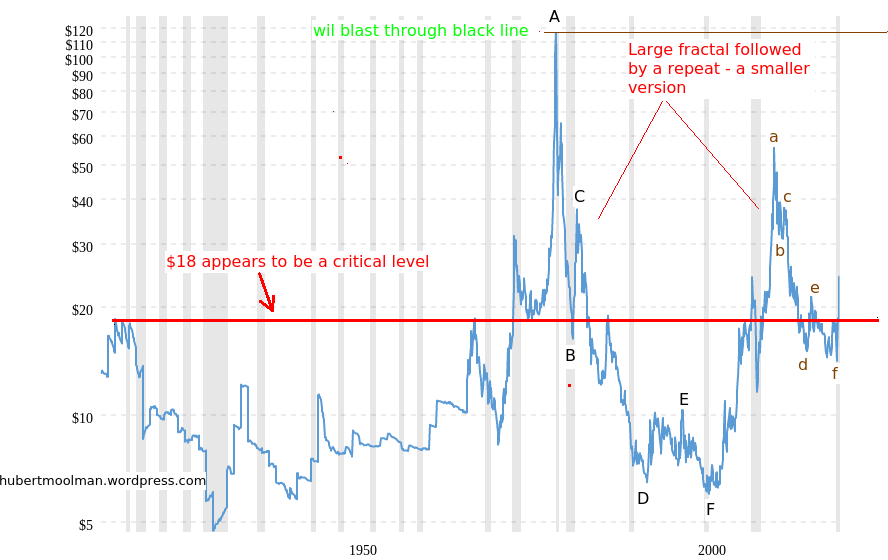 The level around $18 appears to have been very critical, especially since it is the 1920 and 1968 inflation adjusted high.

It was an important level to cross on the way to the 1980 high, evidenced by the fact that it came back to that level (after it blast through in Dec 1973) before setting off to that all-time high of $118 ($50 in nominal terms).

It sealed the silver bear market in 1984 when it broke down below the line, and the again in 1987, when it failed right at the line.

The recent rally also really ignited when it passed this important level. Based on the fractals that are present, I have no doubt that the recent cross of the $18 area sets silver up for a rally that will easily surpass the $118 inflation-adjusted high.

I have marked two fractals A to F (big fractal) and a to f (small fractal). When two fractals like these appear in this order, and in this manner, then the probability of taking the high of the bigger fractal out is really high.

Confirmation of this comes when price takes out the level at point a (just higher than $50).

Below, is a silver chart with a Pitchfork:

There is a very specific reason why I applied a Pitchfork here, and it has to do with the second chart in this piece.

Notice how the recent rally stopped exactly at the line. It is likely going through the line very soon. It is gunning for the top of the Pitchfork, and this will likely not take very long.