EDITOR'S NOTE: A month ago, Zerohedge reported that a “mystery gold buyer” purchased 300 tons of gold. In the third quarter of this year, the total amount of central bank gold purchases stood at 399 tons. That being said, the mystery buyer took 75% of all central bank purchases. Well, after weeks of speculation, China admitted to being the much-speculated clandestine consumer. Think about it: at 32,000 ounces a ton, times 300, times $1,600 an ounce. How large is that purchase? What’s remarkable is the sheer volume and pace of China’s efforts to de-dollarize. What’s even more remarkable is the number of would-be gold investors who hesitated at such a discounted rate.

One month ago, we sparked a frenzy across precious metals circles when we reported that a "mystery" buyer had bought some 300 tons of gold, roughly three quarters of what would be a record 399 tons of central bank gold purchases in the third quarter. 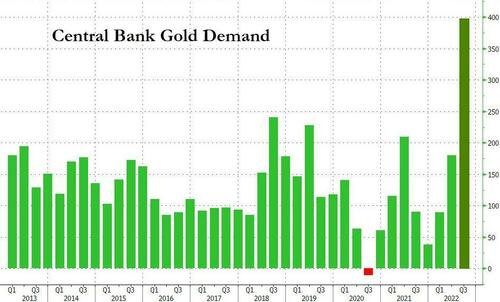 While regular readers already know the details (which we laid out here), here again is the bigger picture: Central banks bought a net 399.3 tonnes of gold in the July-September period, more than quadrupling on the year, according to the November report by the World Gold Council. The latest amount marks a steep jump from 186 tonnes in the preceding quarter and 87.7 tonnes in the first quarter, while the year-to-date total alone surpasses any full year since 1967.

Buyers such as the central banks of Turkey, Uzbekistan and India reported purchases of 31.2 tonnes, 26.1 tonnes and 17.5 tonnes, respectively. The problem, as we calculated at the start of November, is that those amounts only add up to roughly 90 tonnes - "meaning it is unclear who bought the remaining roughly 300 tonnes net."

And while we clearly had one name as the most likely suspect behind the residual buying, it wasn't until a report two weeks later by Japan's Nikkei that said name emerged front and center.

According to the Nikkei, which paraphrased verbatim what we had previously said, with central banks snapping up gold this year amid uncertainty which ones are behind most of that shopping spree, "speculation emerged that China is a big player." And citing analysts, the Nikkei then goes on to suggest that seeing how Russia has been hit by monetary sanctions by the West, "China and some other countries must be hurrying to reduce dependence on the dollar."

"Seeing how Russia's overseas assets were frozen after its invasion of Ukraine, anti-Western countries are eager to accumulate gold holdings on hand," said Emin Yurumazu, a Japan-based economist from Turkey.

Those familiar with China's gold buying patterns are all too aware that Beijing has made similar moves in the past. After keeping radio-silent since 2009, Beijing shocked the market in 2015 when it disclosed it had boosted gold holdings by about 600 tonnes. It has not reported any activity since September 2019.

Fast forward to today when while we still don't know if Russia sold some of its gold to China - all we know is that Russia did sell some gold in recent months after its holdings hit a record in 2020... 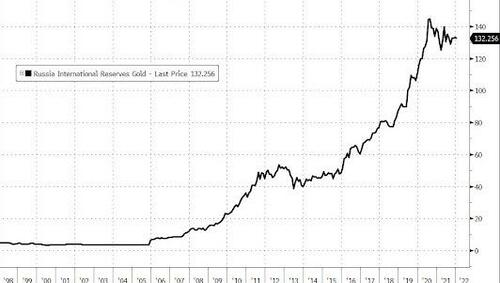 ... what we do know for a fact is that China was indeed loading up on gold.

We know this, because overnight the PBOC officially reported an increase in its gold reserves for the first time in more than three years, confirming that the world's most populous country was indeed the mystery buyer in the bullion market.

In keeping with a time-honored practice of masking its purchases for years (the "dormant" period between 2009 and 2015 when China did not reveal any purchases, and then suddenly reported a 57% jump in reserves being the most famous) and then only gradually letting on how much it had purchased, on Wednesday the Chinese central bank raised its holdings by 32 tons in November from the month before and really from the last official update in Sept 2019, according to data on its website.

That brought its total to 1,980 tons (or 63.67m fine troy ounces) the sixth-biggest central bank bullion hoard in the world, but similar to previous disclosures it is likely that China has purchased far more in the past three years but will only reveal just how much in coming months. That said, China has a long way to go for its gold holdings to catch up to the US (which may or may not have the gold it represents), and even if combined with Russia's holdings, the two countries would still not be the world's largest gold holder. 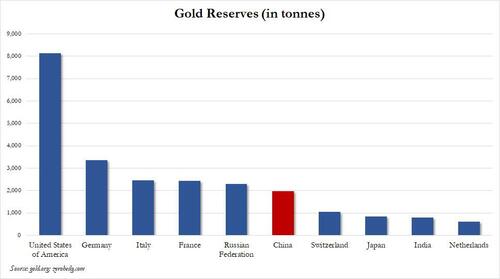 Why now? Well, as Bloomberg reports, echoing Nikkei above, "for China, the need to find an alternative to dollars, which dominate its reserves, has rarely been greater." Tensions with the US have been high since measures taken against its semiconductor firms, while Russia’s invasion of Ukraine has demonstrated Washington’s willingness to sanction central bank reserves. In other words, now that the US has shown it is ready to weaponize the dollar, any USD reserves held by the Fed, Western banks or any other counterparty, could and will be promptly confiscated if China does something unpalatable... like invading Taiwan. Which is why China is desperately seeking money without counterparty risk. Here it has just two choices: crypto or gold. For now, it has picked the latter.

Others echoed this dedollarization thesis which we have been pushing for years: according to UBS analyst Giovanni Staunovo, the PBOC’s purchases may be part of a plan to diversify its reserves away from the dollar: “Gold holdings in China as part of the total reserves are still very low, so there is probably room for further purchases down the road."

As regular readers are well aware, China has previously gone long periods without disclosing changes in its gold holdings. When the central bank announced a 57% jump in reserves to 53.3 million ounces in mid-2015, it was the first update in six years. It took another breather from the end of October 2016, before resuming reporting purchases in December 2018.

While central bank buying rarely drives sustainable gold rallies, it can provide an important pillar of support when prices fall. The precious metal has been under pressure this year from the Federal Reserve’s aggressive monetary tightening, though it has held up relatively well against moves in the dollar and Treasury yields.

“As deglobalisation accelerates, the non-G-10 nations are expected to ‘re-commoditize’ and ramp up gold holdings,” said Nicky Shiels, head of strategy at MKS PAMP SA.

Meanwhile, as Zoltan Pozsar wrote yesterday in a must-read note, the role of gold may be changing as first Russia, then other countries (China) seek to force out the petrodollar and replace it with petrogold, a move which would finally lead to substantial price upside for the yellow metal which has gone nowhere in the past 2 years.