EDITOR NOTE: It took the world nearly 2,000 years to accumulate global debt of $5 trillion (1971). From 1971 to 2000, that $5 trillion grew to $8 trillion. And from 2000 to the present day, that $8 trillion ballooned to $280 Trillion! The world is likely NOT going to be able to get rid of that debt burden. So, what might happen instead? Global debt will implode. And as the current debt levels support the ballooning asset valuations we see taking place today--from stocks and bonds to real estate--those too will implode, possibly by up to 95% of real value as measured in gold. If you’re not seeing this, then you risk getting run over by the deflationary trend that’s about to decimate global wealth in the coming years. Remember, sound money is measured in gold, not paper.

Egon von Greyerz:  2021 is likely to be a year of awakening. This is when the world will start to realise that the $280 trillion global debt has no value and will never be paid back.

But even worse than that, of the $280 trillion a staggering $200t has been created in the last 20 years.

AS DEBT IMPLODES SO WILL ASSET PRICES

Looking at the other side of the balance sheet, there will be an even bigger shock for investors and property owners as debt implodes. Because asset valuations are a function of the debt. And if debt implodes, which is inevitable, so will asset prices.

This is why prices of stocks, bonds and property will implode by more than 95% in real terms (gold) as I outlined in my KWN article last week.

Anyone who can’t see what is happening is either blind or hasn’t studied history.

We saw exponential debt expansion 1971 to 2000. Since then the growth has been explosive.

The next phase will be hyperinflationary and that is likely to start in 2021. Just look at the graph and table from the Weimar Republic. 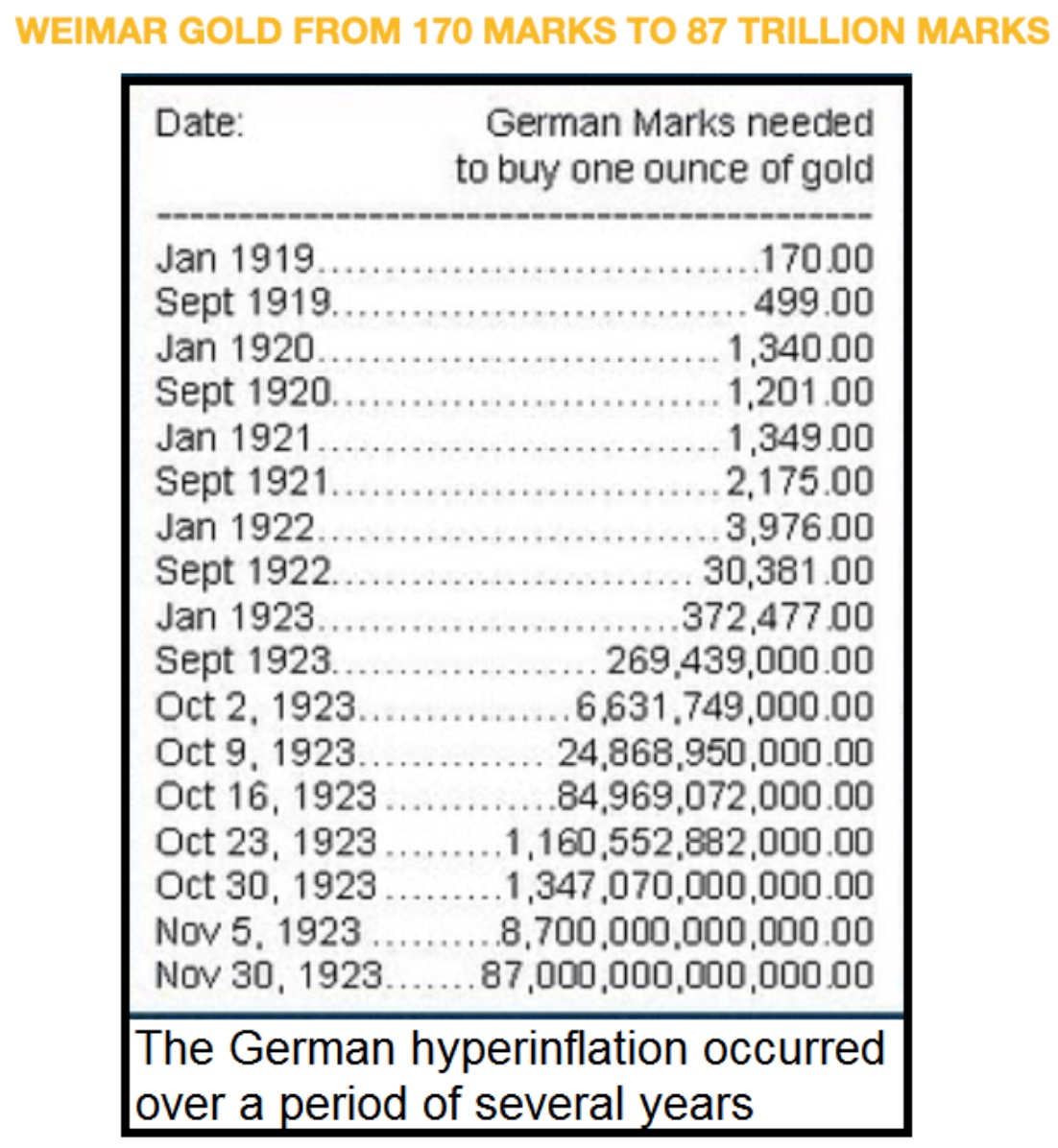 Hyperinflation is a currency event. This means that it arises not as a result of rising prices but due to the collapsing currency. The dollar index is already down 12% since the March high. The combination of the Covid crisis, debt explosion and money printing could easily start a dollar waterfall in 2021. This would mean that hyperinflation starts. And just look at history (which you can read in the table above) and you can see that once it starts it goes explosively fast.

Hyperinflation is guaranteed. It is only a question of when.

We have had the debt explosion and after that it gets dramatically worse as I show above.

Clearly not a real boom but just debt induced.

Money production has clearly become extremely efficient! Just in the last 2 weeks of Nov M1 jumped up by $1/2 trillion.

This will clearly end badly!

So now everything is in place for hyperinflation. Velocity of M1 is still low but that will soon change as the dollar collapses.

We have of course seen the first part of the currency slump already. A fall of 97% since 1971 certainly looks like a collapse to me. Now the time for next fall of 99% or more is here. Anyone who doesn’t see that denies history. (Sadly, denying history or even rewriting history has become very popular currently.)

It is quite ominous that 100 years after Weimar, the world is standing on the cusp of a  similar debt and currency collapse with hyperinflation as a consequence.

100 years ago it was primarily the problem of one country whose debt the world could afford to  write off. Well they had no choice since it was worthless anyway.

But this time it is a global problem with every country in the same situation. There will be no one to save individual countries or the global financial system. Yes, all major central banks will print endless amounts of money. But that will only exacerbate the situation.

A debt problem can never be solved with more debt. And a dying currency cannot be resurrected.

So the world is in for a major shock in the next few years. The problems will be at all levels – financial, social, political and geopolitical.

The easiest level to solve for investors who have savings at whatever level is to buy some insurance in the form of physical gold.

There is a major debate going on between BTC and gold. Investors, including institutions,  are putting major amounts into BTC.

I am not a Bitcoin expert. But I am very clear that the reasons for recommending gold as the ultimate form of wealth preservation cannot be fulfilled by Bitcoin.

I have stated many times that BTC could be a spectacular investment and go to $1 million as for example Raoul Pal (RealVision) advocates. He is a very smart investor and bases his forecast on stock to flow.

On the other hand, in my view, BTC could go to zero if central banks ban it as they introduce their own digital currencies. Since BTC is not backed by any asset or any central bank it would be worthless if it was banned. Sure, there could be a black market but that wouldn’t serve much purpose if virtually no one would accept payment in BTC.

The degree of wealth preservation required to preserve capital depends greatly on where we are in the investment cycle.

If investment markets are sound and not overvalued as a result of speculation or false markets, stocks and bonds can represent sound wealth preservation.

However in the present bubble markets, all assets are overvalued as a result of unlimited credit expansion and money printing. As I stated above, the risk of a 95% fall is much greater than a 100% gain.

Government bonds, used to be the ultimate form of wealth preservation. Many investors have still not realised that heavily indebted governments, who are totally dependent on money printing to make ends meet, are an extremely poor risk.

So we are now in a period when wealth preservation requires the application of very strict criteria.

Let’s look at some of these:

So these four criteria clearly exclude any digital form of money or other digital  asset.

I will not go into the detailed reasoning behind the above criteria but to an investor who wants the safest foundation for his wealth pyramid, as well as the best insurance possible, they should be obvious.

The ultimate wealth preservation asset must be (as my good friend Simon Mikhailovich states):

The above points 1-4 partly define independence. But more importantly, physical gold doesn’t need the financial system. Even less so when the system is totally dysfunctional like currently.

Bitcoin is definitely not independent based on the 1-4 criteria.

Gold is clearly scarce. 190,000 tonnes ($11t) have been produced in history. Virtually all of that is still here. Around 1.5% is added annually in new mine production.

Investment gold is only 43k tonnes or $2.6t. That represents 0.5% of world financial assets – a minuscule part.

So this is the one thing that gold and Bitcoin have in common – they are both scarce.

Where physical gold is superior to any other financial asset is its Permanence.

Gold has been money for 5,000 years and is the only money which has survived in its original form.

Again we are back to history. If only one currency has survived for 5,000 years, it clearly proves that it has the right attributes. Anyone who wants to argue that Bitcoin or other crypto currencies can assume the mantle of gold after 11 years’ existence is premature by a few thousand years.

Cryptos/digital currencies are such a new development that even if they survive, there will be 100s or even 1000s of mutations over time. So permanence is very unlikely.

The risk with digital currencies, whether it is BTC or issued by a central bank, is also that they can disappear in a millisecond. Anything from EMP attacks (electromagnetic pulse) to quantum computers can make this form of money just vanish.

GOLD MUST NOT BE HELD IN AN ETF

Gold ETFs are a very risky way to invest in gold. Many of them don’t have the gold. Please see my article “BUYER BEWARE – GOLD ETFs LIKE GLD OWN NO GOLD.”

According to Ronan, the GLD CFO resigned one day before the financial year end on 29 Sep 2020. Never good news when the finance chief resigns at critical times.

Also, data on amounts of gold held at the Bank of England was omitted. And finally, the auditors KPMG have raised a “Critical Audit Matter” pertaining to the existence of GLD’s gold holdings held by sub-custodians.

So my advice is the same, gold ETFs have nothing to do with wealth preservation and should be avoided.

Finally, my position hasn’t changed for over 20 years – The only way to hold gold is in physical form, outside the banking system with direct access to your gold.

That is the only true and history tested form of wealth preservation and therefore critical at a time when the survival of the financial system will be severely tested.