EDITOR NOTE: It’s no secret that since 2014, central banks have slowly been de-dollarizing. The global share of dollar-based reserves has dropped from 66% to 59%. That comprises US Treasuries and other forms of equity and debt securities. To put it rather crudely, our assets are being dumped and passed over for more attractive alternatives--namely gold and other currencies. There’s a problem here. The Biden/Yellen team is pedal-to-the-metal on “going big” in stimulus spending. Foreign investment has been a major funding source for America’s spending. It’s what allowed us to balloon our national debt. Despite international dollar reserves dropping fast, the US still needs to finance its spending. That’s where the Federal Reserve’s money-printing machine comes in. It means that every American is forced into investing toward the government’s spending as the value of each dollar is being driven lower and lower as the money supply gets higher and higher. It’s called inflation. And as international confidence in the dollar’s reserve power falls, so too does our purchasing power, as the money supply and our national debt soars to record-shattering levels.

Central banks getting nervous about the Fed’s drunken Money Printing and the US Government’s gigantic debt? But still leery of the Chinese renminbi...

The global share of US-dollar-denominated exchange reserves dropped to 59.0% in the fourth quarter, according to the IMF’s COFER data released today. This matched the 25-year low of 1995. These foreign exchange reserves are Treasury securities, US corporate bonds, US mortgage-backed securities, US Commercial Mortgage Backed Securities, etc. held by foreign central banks. 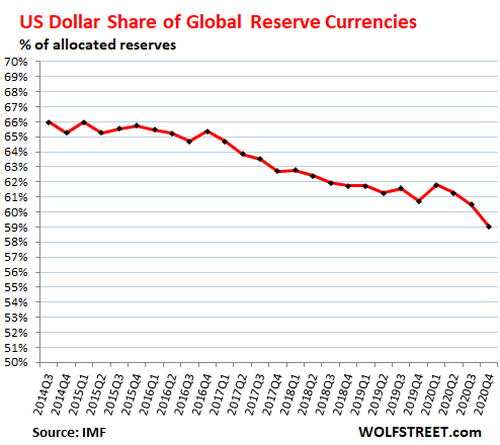 Not included in global foreign exchange reserves are the Fed’s own holdings of dollar-denominated assets, its $4.9 trillion in Treasury securities and $2.2 trillion in mortgage-backed securities, that it amassed as part of its QE.

The US dollar’s status as the dominant global reserve currency is a crucial enabler for the US government to keep ballooning its public debt, and for Corporate America’s relentless efforts to create the vast trade deficits by offshoring production to cheap countries, most prominently China and Mexico. They’re all counting on the willingness of other central banks to hold large amounts of dollar-denominated debt.

But it seems, central banks have been getting just a tad nervous and want to diversify their holdings – but ever so slowly, and not all of a sudden, given the magnitude of this thing, which, if mishandled, could blow over everyone’s house of cards.

Two decades ago, when the dollar had a share of about 70% of reserve currencies, a presumed competitor became day-to-day reality: The euro, which combined the currencies of the member states into one currency, thereby combining their weight as reserve currency. Since then, the dollar’s share has dropped by 11 percentage points.

By contrast, between 1977 and 1991, the dollars share had dropped by 46 percentage points – with huge plunges in 1979 and 1980 possibly linked to US inflation which was threatening to spiral out of control, peaking at nearly 15% in 1980. The plunge bottomed out in 1991, with inflation more or less under control. And the dollar’s share then surged by 25 percentage points until 2000: 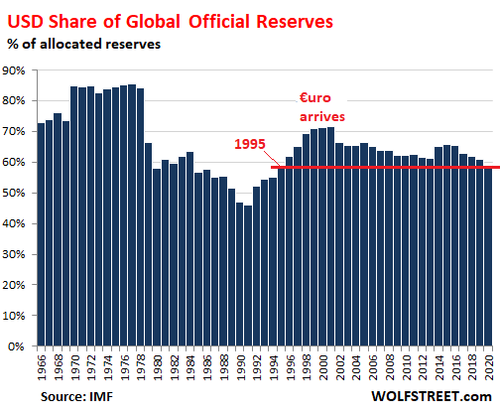 The other reserve currencies.

The euro’s share had since been in the range between 19.5% and 20.6%, but it Q4 it broke out of the range and rose to 21.4%, the highest in the data. The ECB’s holdings of euro-denominated assets that it acquired as part of its QE are not included in the euro-denominated foreign exchange reserves.

The rest of the reserve currencies are also-rans – the spaghetti at the bottom in the chart below. This includes the Chinese renminbi, the bold red line at the bottom: 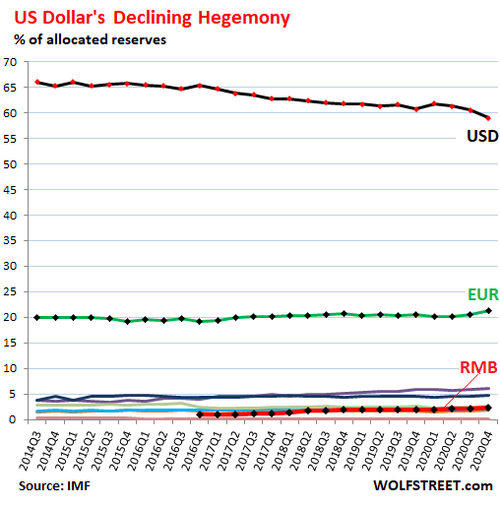 Renminbi a threat to the dollar’s hegemony? Not yet.

The renminbi’s share is still only 2.25%, despite the magnitude and global influence of China’s economy, and despite the hype when the IMF elevated the renminbi to an official global reserve currency in October 2016 by including it in the basket of currencies that back the Special Drawing Rights (SDRs).

But the renminbi’s share has been creeping up ever so slowly. At the rate it has been gaining momentum over the past two years (+0.36 percentage points in two years), it would take the renminbi another 50 years or so to reach a share of 25%.

Clearly, other central banks are still leery of the renminbi and its implications, and are not eager to dump their dollars all at once in exchange for renminbi; easy does it.

Also-rans under the microscope: Rise of the yen.

To see what’s going on with the spaghetti at the bottom of the above chart, I magnified the scale and limited it to the range of 0% to 6%. This takes the dollar and the euro out of the picture, and allows for a detailed look of the other reserve currencies.

Despite Brexit and all the scary hoopla around it, the pound sterling (GBP), the fourth largest reserve currency, has not given up any share. 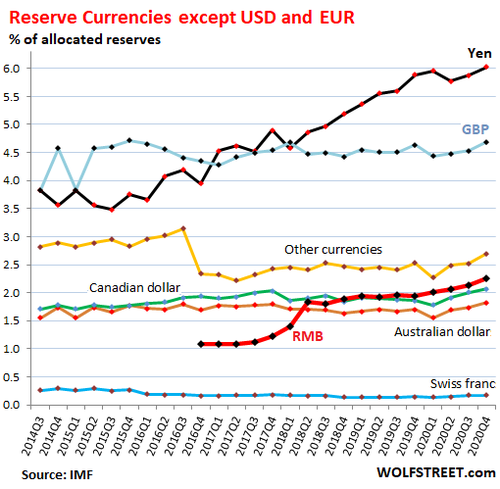 The Eurozone has had a large trade surplus – between €200 billion and €275 billion a year in recent years – with the rest of the world after it emerged from the euro debt crisis in 2012. From the US side, the US trade deficit in goods with the Eurozone was $183 billion in 2020.