EDITOR NOTE: We’re witnessing one of the sharpest declines in debt resulting from the COVID economy. Like businesses, US households tend to borrow money when interest rates are low; kicking the can down the road while income is flowing. Now, with millions unemployed, the future is less certain. With an uptick in forbearances yet still no strong job growth, non-payments and defaults among household borrowers are just around the corner. And with that impending decline comes an accelerated unraveling of the economy.

The Federal Reserve Bank of New York’s Center for Microeconomic Data today issued its Quarterly Report on Household Debt and Credit, which shows that total household debt decreased by $34 billion (0.2%) to $14.27 trillion in second quarter of 2020. This marks the first decline since the second quarter of 2014 and is the largest decline since the second quarter of 2013. The Report is based on data from the New York Fed’s Consumer Credit Panel, a nationally representative sample of individual- and household-level debt and credit records drawn from anonymized Equifax credit data. This latest report reflects consumer credit data as of June 30, 2020.

Reflecting the sharp decline in overall consumer spending due to the COVID-19 pandemic and related social distancing orders, credit card balances fell sharply by $76 billion in the second quarter. This was the steepest decline in card balances seen in the history of the data. Auto and student loan balances were roughly flat in the second quarter. In total, non-housing balances (including credit card, auto loan, student loan, and other debts) saw the largest drop in the history of this report, with an $86 billion decline.

Aggregate delinquency rates dropped markedly in the second quarter, reflecting increased uptake of forbearances, which were provided by the Coronavirus Aid, Relief, and Economic Security (CARES) Act. Note that accounts in forbearance are typically marked as current on consumer credit reports.
emphasis added 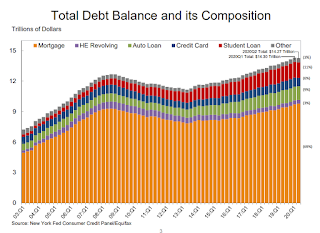 Here are two graphs from the report:

From the NY Fed: 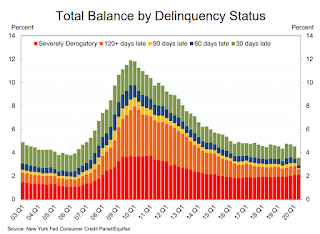 The second graph shows the percent of debt in delinquency.

The overall delinquency rate decreased sharply in Q2.  From the NY Fed:

Aggregate delinquency rates dropped markedly in the second quarter, reflecting an uptake in forbearances (provided by both the CARES Act and voluntarily offered by lenders), which protect borrowers’ credit files from the reporting of skipped or deferred payments. Note the difference that accounts in forbearance might be categorized as delinquent on the lender’s book, but typically as current on the credit reports. As of June 30, 3.6% of outstanding debt was in some stage of delinquency, a 1.0 percentage point decrease from the fourth quarter of 2019. Of the $512 billion of debt that is delinquent, $372 billion is seriously delinquent (at least 90 days late or “severely derogatory”, which includes some debts that have been removed from lenders books but upon which they continue to attempt collection).

The uptake in forbearances is notably visible in the delinquency rate transitions for mortgages. The share of mortgages in early delinquency that transitioned ‘to current’ spiked to 61.1% reflecting that many of those became forborne, while there was a decline in the share of mortgages in early delinquency whose status worsened during the second quarter of 2020. There were only 24,000 new foreclosure starts; given that homeowners with federally backed mortgages are currently protected from foreclosure through a moratorium in the CARES Act.

There is much more in the report.