EDITOR NOTE: Silver is about to soar in a matter of weeks. The fundamental factors weighing in its favor--from inflation to industrial demand to investor interest--are all signalling accelerated accumulation. Right now, most investors are focused on the election. The smart ones are focusing on how monetary and fiscal action is playing against the demand and dwindling supply of gold’s second. Silver is poised for major upside at this very moment. Consider getting a little exposure now, or miss out and regret it.

Do you have a flashlight, spare batteries and some duct tape stashed away for home emergencies like power outages or hurricanes? Of course you do. How about 100 ounces of silver coins? If not, you should.

In an extreme social or infrastructure breakdown — where banks, ATMs and store scanners are offline — silver coins might be the only way to buy groceries for your family. This is one of many reasons why sales of silver coins and bullion are set to skyrocket.

The upcoming election and its aftermath could witness social unrest that would make this summer’s chaos look downright tame. We might not even know the winners for several weeks after the election. Things could get very ugly.

If that happens, shortages will appear and the price of silver could soar to $60 per ounce or higher from current levels of about $25 per ounce.

Silver Is More Practical Than Gold

As you know, I write and speak frequently on the role of gold in the monetary system. Yet, I rarely discuss silver. Some assume I dislike silver as a hard asset for your portfolio. That’s not true.

In fact, in an extreme crisis, silver may be more practical than gold as a medium of exchange. A gold coin is too valuable to exchange for a basket of groceries, but a silver coin or two is just about right. 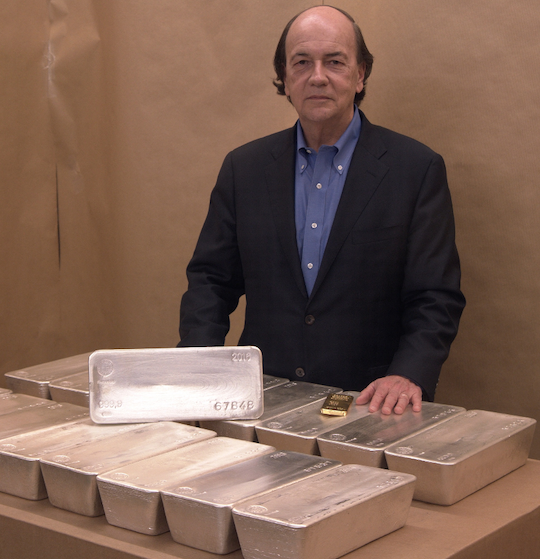 Here’s a photograph of your correspondent inside a highly secure vault in Switzerland. I’m pictured with a pallet of silver ingots of 99.99% purity. The ingots weigh 1,000 ounces each, about 62 pounds. The brown paper hung on the walls behind me is to hide certain security features in the vault that the vault operators did not want to reveal. You may notice the small 1-kilo gold bar by my left hand, worth about $45,000.

Silver is more difficult to analyze than gold because gold has almost no uses except as money. (Gold is widely used in jewelry, but I consider gold jewelry a hard asset, what I call “wearable wealth.”)

Silver, on the other hand, has many industrial applications. Silver is both a true commodity and a form of money.

This means that the price of silver may rise or fall based on industrial utilization and the business cycle, independent of monetary factors such as inflation, deflation, and interest rates.

Nevertheless, silver is a form of money (along with gold, dollars, bitcoin, and euros), and always has been.

“The Once and Future Money”

My expectation is that as savers and investors lose confidence in central bank money, they will increasingly turn to physical money (gold and silver) and non-central bank digital money (bitcoin and other crypto currencies) as stores of wealth and a medium of exchange.

This is why I call silver “the once and future money,” because silver’s role as money in the future is simply a return to silver’s traditional role as money throughout history.

In short, silver is as much a monetary metal as gold, and has just as good a pedigree when it comes to use in coinage. Silver has supported the economies of empires, kingdoms and nation states throughout history.

Before the Renaissance, world money existed as precious metal coins or bullion. Caesars and kings hoarded gold and silver, dispensed it to their troops, fought over it, and stole it from each other.

Land has been another form of wealth since antiquity. Still, land is not money because, unlike gold and silver, it cannot easily be exchanged, and has no uniform grade.

The Birth of Fractional Reserve Banking

In the fourteenth century, Florentine bankers (called that because they worked on a bench or banco in the piazzas of Florence and other city states), accepted deposits of gold and silver in exchange for notes which were a promise to return the gold and silver on demand.

The notes were a more convenient form of exchange than physical metal. They could be transported long distances and redeemed for gold and silver at branches of a Florentine family bank in London or Paris.

Bank notes were not unsecured liabilities, rather warehouse receipts on precious metals.

Renaissance bankers realized they could put the precious metals in their custody to other uses, including loans to princes. This left more notes issued than physical metal in custody.

Bankers relied on the fact that the notes would not all be redeemed at once, and they could recoup the gold and silver from princes and other parties in time to meet redemptions.

Thus was born “fractional reserve banking” in which physical metal held is a fraction of paper promises made.

Despite the advent of banking, notes, and fractional reserves, gold and silver retained their core role as world money. Princes and merchants still held gold and silver coins in purses and stored precious metals in vaults. Bullion and paper promises stood side-by-side. Still, the system was bullion-based.

Silver’s popularity as a monetary standard was based on supply-and-demand. Gold was always scarce, silver more readily available. Charlemagne invented quantitative easing, or “QE,” in the ninth century by substituting silver for gold coinage to increase the money supply in his empire. Spain did the same in the sixteenth century.

These were widely circulated and used as money by everyday Americans. The American dollar was legally defined as one ounce of silver.

The American silver dollar of the late eighteenth century was a copy of the earlier Spanish Real de a ocho minted by the Spanish Empire beginning in the late sixteenth century.

The English name for the Spanish coin was the “piece of eight,” (ocho is the Spanish world for “eight”) because the coin could easily be divided into one-eighth pieces.

Until 2001 stock prices on the New York Stock Exchange were quoted in eighths and sixteenths based on the original Spanish silver coin and its one-eight sections.

The Debasement of U.S. Coinage

Silver has most of gold’s attractions. Silver is of uniform grade, malleable, relatively scarce, and pleasing to the eye. After the U.S. made gold possession a crime in 1933, silver coins circulated freely. The U.S. minted 90% solid silver coins until 1964. Debasement started in 1965.

Depending on the particular coin – dimes, quarters, or half-dollars – the silver percentage dropped from 90% to 40%, and eventually to zero by the early 1970s. Since then, U.S. coins in circulation contain copper and nickel.

Silver Wins, No Matter Who Wins the Election

Regardless of which party wins the U.S. presidential election in November, the U.S. is set for more fiscal stimulus in 2021 and lots of government spending. If Joe Biden wins, Democrats will push for free healthcare for all, free healthcare for illegal immigrants, and the Green New Deal.

If President Trump wins, you’ll also see a lot more spending. One thing Trump has proven in his time in office is that he’s not a fiscal conservative.

The market’s anticipation of this outcome, starting in early November, will be a powerful tailwind for silver.

Investors should prepare now, before the spike.

Originally posted on The Daily Reckoning